This afternoon I visited the Charterhouse on the quay at Fishguard Harbour.

Rob Rees [Restoration Leader] and Claire [Team Leader at POINT] together with six members of POINT were working on the project. The cabin-top had gone and the view of the empty hull surprised me.

The POINT group with Claire and Gwilym Price [Dep. Chairman of Charterhouse Returns] 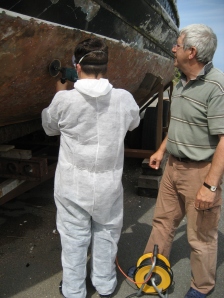 Rob Rees teaching a new skill and below the result of the skill! 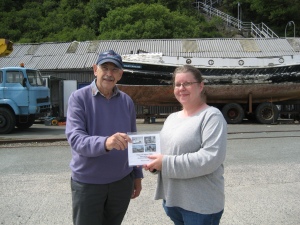 Phil Davies presented the book on Charterhouse to Claire [Team Leader at POINT]  for the reading room at their HQ at Parc-y-Shwt. 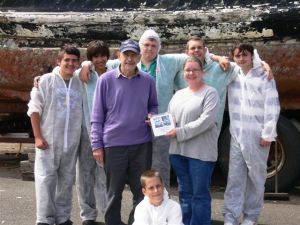 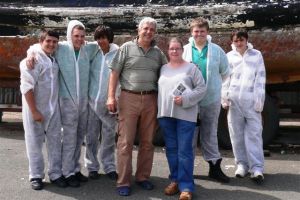 Comments Off on June 2010 – Visit to Charterhouse | 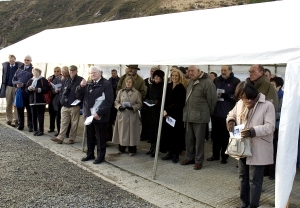 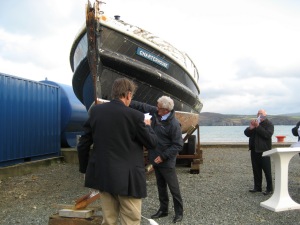 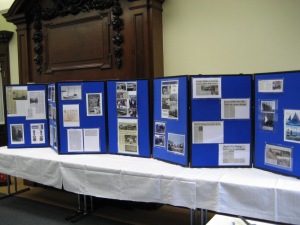 November 2019  Update:
The Charterhouse Returns Trust is a charity registered in the UK no. 1139336.

Due to a local contact with the firm listed below, we are involved with:-

Comments Off on Charity Registration | 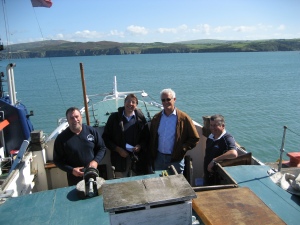 Charterhouse moved to her permanent berth

Charterhouse was towed [by tractor] to her permanent berth next to the RNLI Fishguard Station on Thursday by Mike Iles and  Chris Williams of  Goodwick Marine http://www.goodwickmarine.co.uk/ and Phil Rees and myself. All four are members of the Charterhouse Returns Committee.

It is here that she will remain for restoration [with STENA’s compliments].
The position is 100 feet from her original [1909] lifeboat station and slipway. The harbour was extended in the intervening 100 years as a result the original slipway would be 100 feet from the sea.

All passengers on the Rosslare Ferry will be able to view it as they dock at Fishguard from the afterdeck of the ferry  or when leaving for Rosslare.

Charterhouse is so large that it can be seen from the Marine Walk at Fishguard!

Phil Rees on board the Charterhouse with Needle Rock astern.
[Phil Rees in the cockpit gives an idea of the size of Charterhouse]

Looking at the store-shed – on the position of the 1909 Lifeboat Station.

The Fishguard Lifeboat Station with the Blue Peter Lifeboat and Charterhouse.

The Rosslare Ferry gives a good view of the Charterhouse from the afterdeck. 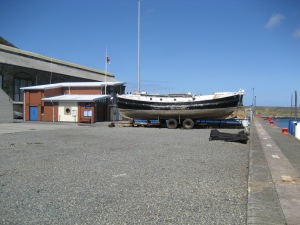 The Charterhouse and Fishguard Lifeboat Station alongside the quay and visiting craft.

Comments Off on Charterhouse moved to her permanent berth |