Our second visit to the Marian (Charterhouse)

Phil Davies, Phil Rees and Steve Done in one car and Richard Davies, Bob Wheatley and Mike Iles in the other car.

The Lomas Family, Neil, Anne, Judith, Ruby and Dougie arrived to show us their boat.

We inspected the Marian and a sister lifeboat as well as meeting Scott Metcalfe.  Scott has a engine-box for us to exchange and will be lifting the Marian onto the lorry for us.

The main purpose of the visit was to assess the possibility of a sea delivery or a road delivery! 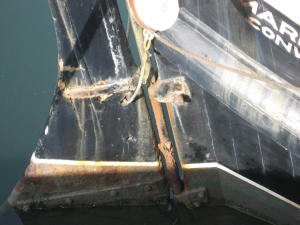 Here are some general photographs.

The original wheel from the Charterhouse

This entry was posted on Thursday, April 23rd, 2009 at 2:12 pm and is filed under Visits. You can follow any responses to this entry through the RSS 2.0 feed. You can leave a response, or trackback from your own site.

One Response to Our second visit to the Marian (Charterhouse)