After our initial visit in January,  Cllr Richard Davies,  Cllr Gwilym Price ( the Mayor of Fishguard & Goodwick from May 2009] and Cllr Bob Wheatly  members of the town centenary group called a meeting of all interested groups.

The meeting was called at the Royal Oak on Fishguard Square. [the photo below of Royal Oak nearer the time of the Charterhouse’s initial visit!] 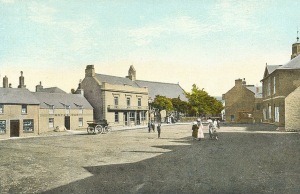 As a result of the meeting, the decision was made to initiate the return of the Charterhouse.

It was fitting therefore to name the project – Charterhouse Returns.

The Committee consists of: –

It was descided to visit the Charterhouse on the 22nd April.

The group travelling at 5am: –

Note: – not one of the Davies’ are related!

This entry was posted on Sunday, April 19th, 2009 at 7:49 pm and is filed under Committee, Visits. You can follow any responses to this entry through the RSS 2.0 feed. You can leave a response, or trackback from your own site.